You are here: Home / Boating / Navigation / Shallow Spots and How To Navigate On Charlotte Harbor

Navigating Charlotte Harbor is a concern for many new boaters coming to the area.  They may have heard from some internet chat rooms that there is a lot of shallow water and you better be careful.  Sailboat owners and deep draft power vessel owners frequently call me with navigation questions on the harbor.  If you care looking for a sailboat access home than this is very important.  Of course, you better be sure about your canal and the exit water ways to the harbor from your dock but once you get on the harbor it looks a lot bigger than looking at an aerial view or google earth and some become intimidated with it!  Most are surprised when I show them the view from Ponce Park at Fat Point in Punta Gorda.  I do this typically on your first visit to town so you can get a grasp on how enormous the harbor really is.

First, let me say there is a lot of shallow water but in the same breath I can say that navigation is actually very easy once you understand a few basic things about the harbor.  Let’s take a look at a typical trip from the Peace River Bridge (bridge connecting Punta Gorda and Port Charlotte) to Boca Grande Pass which is the entrance to the Gulf.  This route is particularly good to understand if you are a wayward sailor and looking to moor to the public mooring buoys on either side of the bridge in Punta Gorda.  Mast height on the Peace River Bridge is 45 feet so that eliminates many sailing vessels which desire to use the moorings east of the bridge but there are still plenty on the west side.

From the bridge making way westward you can sometimes become a little confused at many different day markers what they mean.  To your east you will see Fisherman’s Village and there is a long set of channel markers to lead you there.  Your first bearing point will be Red Marker 2, which has a flashing beacon.  Your water depths throughout the Peace River in this area will be 8-12 feet or more.  Colony Point (often not shown on charts) is the beginning of the large fat point for which Punta Gorda was named.  Punta Gorda is Spanish for fat point.  We often refer to this area as Colony Point because of the condos in the area and the road bearing the same name.  Colony Point is a good place to avoid getting too close to land as the water comes up very shallow on this point and adjacent mangroves.  The west side of the point is Ponce de Leon Park which is a primary exit for all of Punta Gorda Isles (PGI).  THIS IS THE MOUTH OF THE PEACE RIVER.

If you follow from Red #2 to Green #1 there is plenty of water up to 16’.  Nothing tight about navigating or staying close to the markers.  There are many sailboat races each year at the mouth of the river with plenty of room with no worries about running aground even with deep draft sail boats but still be mindful of the shallows on Colony Point and either side of the channel markers to Ponce Park.

From Green #1, the harbor is wide open!  On either side of the harbor for your southern track is a sandbar a ¼ mile off the mangroves so basically you have miles of water to enjoy with no worries.  In general, there is water from 7 feet and deeper as long as you stay off this sandbar which is often visible at low tides.  There are tons of room for any style boat heading south.  THERE ARE NO NAVIGATIONAL MARKERS IN THE MIDDLE OF THE HARBOR (I guess they are not really necessary).

Your next point for navigation can be Green Marker #5 which identifies the end of an underwater point (and land point) known as Cape Haze Point.  DO NOT CUT THIS SHORT UNTIL YOU KNOW YOUR WAY AROUND!  It will be a soft grounding if you run too close to the land point but countless many of us, me included have made that mistake and it normally means waiting for high tide to get off.

You could also target Red Marker #6 in front of Burnt Store Marina and then head West with a straight line track to Boca Grande which will be barely visible at this point.  Proceeding westward you can follow the day markers to the Pass but there is plenty of water to explore and enjoy so you don’t have to stay anywhere close to the markers until you get closer to Boca.

BE AWARE OF THE FOLLOWING OBSTRUCTIONS IN THE HARBOR!  MOST ARE POORLY MARKED HOWEVER NONE ARE IN YOUR TRAVEL PATHS BETWEEN MARKERS:

North of Marker #1 near the entrance to the Peace River is The Old Tire Reef.  Not much there on the bottom but there are pilings sitting out in the middle of nowhere that you might not expect.

Mid harbor there is a large artificial reef known as Alligator Creek Reef.  It is poorly marked!  You will see a large concrete piling sticking out on either end.  They are not lit at night!  Crazy, so before traveling at night a run through the harbor at day time is recommended.  Alligator Creek Reef is in front of Alligator Creek which has a marked channel.  Between the concrete pilings the fish attracting debri on the bottom should not cause any issues with navigation as there is about 10-12 feet of water there.  Here is what the pilings sitting in the middle of nowhere look like!  The first photo is the north end and the second is the south end of the artificial reef. 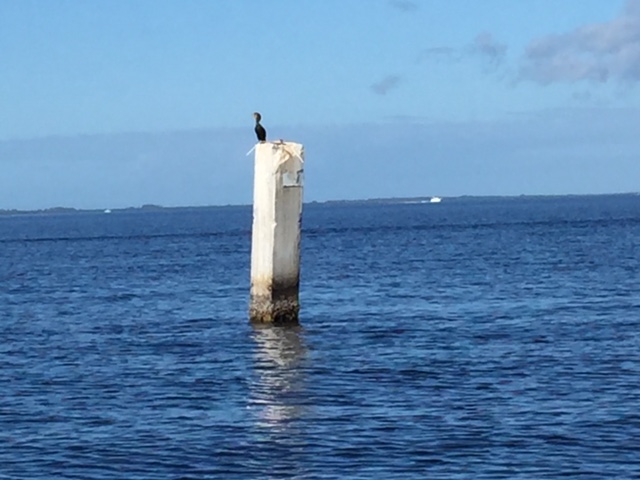 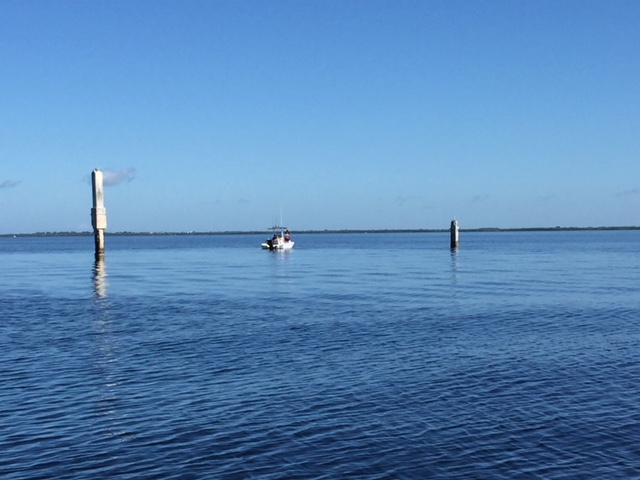 Once you are passing Green Marker #5 on Cape Haze Point beware there is a public artificial fishing reef known as Cape Haze Reef north of your trajectory line between #5 and Red marker #4.  It is well marked with Yellow floating cylinders that protrude about 5 feet above the water line.

The next obstruction to be aware of is called Danger Reef.  I think this is a great name for this as there is a sunken 40 foot boat on the bottom.  It is marked with a single non-descript piling that in my opinion is woefully inadequate.  This should not be a problem unless you are just tooling around exploring the harbor.  It is unlikely you will not see it but I find it sneaks up on me.  At night it is not lite!  Very dangerous so you need to know your way around very well during the daytime prior to traveling at night.

That’s about it for obstructions however most will never cause you an issue during daytime navigation.

Charlotte Harbor and the adjoining waters will provide you with a lifetime of enjoyment without navigation worries.  Just take your time and watch what other mariners are doing.  I find some of my customers that are not experienced with saltwater buy larger boats than needed.  Particularly fisherman.  Since they may have come from lakes and perhaps not understanding channel markers and saltwater navigation they tend to buy boats that draft too much, are too long, gunnel height is too high and perhaps have twin outboards.  I will give you guidance on what type of boat to optimize your fishing goals.  For sailors, there are no real worries on running aground and there are plenty of homes to accommodate a 6 foot draft (or less) but sailboats with deeper drafts may have to make concessions on tides.  Its important to know that your home is truly sailboat accessible before you enter into a contract however the open harbor will never be a problem.

Shallow Spots and How To Navigate On Charlotte Harbor was last modified: December 20th, 2018 by Capt. Chuck Eichner

All waterfront property is not created equal! If you're looking for a home in southwest Florida with sailboat access to Charlotte Harbor, don't make a costly mistake! Call us to assist you in making sure the properties you're considering have sufficient draft, no fixed bridges, and no other obstacles to cruising from your dock out to the harbor, the Gulf and beyond.

Living in Florida was always my dream after 40 years of life in the northeast. The fast pace of Baltimore and a career as an Electrical Engineer met with the daily question of: there has to be a better way to live and make a living. [Read More …]